Make 2016 an Adventure to Remember!

We’ve been busy finding incredible new adventures for you. Some are a bit wild, some are a bit fancy, but all are guaranteed to create lasting memories for you to live a life of adventure.

Have a look at some of these handpicked adventures or browse them all. All you need to do is select the experience you want to have and let us make it happen.

Uttarakhand is a state in the northern part of India. It is often referred to as the “Land of the Gods” due to the many holy Hindu temples and pilgrimage centres found throughout the state. Uttarakhand is mainly known for its natural beauty of the Himalayas, the Bhabhar and the Terai.

A beautiful six days trekking trip with excellent views of Himalayas. The trek route goes through Deoria tal, Chopta, Tungnath and finally to the Chandrashila Summit which gives an unobstructed view of Himalayas.

It is located along the border of India and Nepal. The Mahakali River trip is an exciting river journey along scenic terraced cultivation of the quaint and remote Kumaoni villages, coupled with sparkling water and wonderful sandy beaches. Even the drive is quite adventurous and picturesque which takes us through many important towns of Kumaon. This trip promises a wilderness journey of a lifetime. It is great for beginners to rafting and kayaking, as well as experienced adventurers as it has a few big rapids, like the ‘Chuka’, ‘Dimberghat’ and ‘The Creek’ rapids, to thrill us

A completely self contained trip, we will run the river with our experienced guides in the day time and bask in the natural beauty of the region in the late afternoon and evening. For enthusiastic anglers – catching the Mahseer fish is an absolute delight, as we camp around Pancheshwar which is a popular fishing spot.

Mountain Biking in the Garhwal Himalayas

A beautiful four days mountain biking tour in the Garhwal Himalaya offers mountain biking experience with easy to moderate difficulty level. Logistics support is provided by a support vehicle and qualified staff, which transfers camping equipment, luggage and supplies during the entire tour.

The cycling route has very less traffic, and passes through small villages and forests. One would get beautiful views of snow clad mountains, vast valleys and the Ganga River along while cycling from Devprayag – Beas Ghat where the river Bhagirathi and Alaknanda meets to name the ‘Holy Ganga’.

Nestling in the north-western corner of Garhwal, Har ki Doon is truly the Gods valley, which happens to be the translation of its name. Lying along the Tons River, a main tributary of the Yamuna, Har ki-Doon is dominated by the peaks of Swargarohini and Banderpunch and its rivers and streams originate from the glaciers of these two mountain massifs.

The people of this valley trace their ancestry back to the days of Mahabharata and claim to be the descendants of Duryodhana and his followers who are still worshipped in ways quiet unique and different from all other temples in India.

Ascend through alpine meadow to the Kuari Pass and gain impressive views of the Great Himalayas and Zanskar Range Before continuing through mixed forest and traditional Hindu villages.

Trekking over the Kuari Pass affords some the finest views of the Himalaya – including the many peaks near Nanda Devi. This trek was a favourite of the British trekkers. The pass was often referred to as the Curzon Pass because of former Viceroy George Nathaniel Curzon’s love for the region, although he never crossed the pass; his party turned back after an attack by a swam of bees!

Although the Kuari Pass (3640m) is not high by Himalayan standards, take an additional day for acclimatization, particularly if considering camping near the pass. 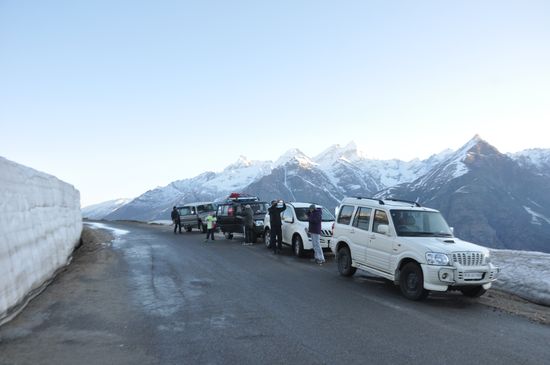 Jeep Safaris are the best way to explore a region, its culture, tradition, to experience its geographical and topographical features and almost everything that a place can offer to us. The insight you gain through the safaris that can be at best explained as a treasure that will with throughout your life and after.

Ladakh is popularly known as “The land of Numerous Passes”, “The Land of Mystic Lamas”, “The Broken Moon” and “The Last Shangri-La”. It is a land like no other, situated in Indian Himalaya in Jammu and Kashmir State. Bounded by two of the world’s mightiest mountain ranges, the Greater Himalaya and the Karakoram, and it lies transversely two others, the Ladakh range and the Zanskar range.

A 6137 metre summit is an excellent introduction to mountaineering in the Himalaya. At 6,121m Stok Kangri is clearly visible from Leh, the ancient capital of Ladakh in Northern India.

You fly from Delhi to Leh and spend two days acclimatizing and visiting hill top monasteries. The climb is technically not difficult, and requires no special mountaineering skills. It gives you a real opportunity to climb a 6137 m mountain in less than a week, which is not possible in any other part of the world. The summit presents one of the most spectacular views of the Saser peak in the Karakoram Range, where the K2 lies. On a clear day you can see as far as the mighty Karakoram and K2, 220Km to the North West.

You would begin your journey by acclimatizing for a few days at Leh town, where you can also visit ancient palaces and monasteries. Drive past 7000 meter high mountains, awesome glaciers, to begin the river run in the Zanskar valley at 12,000 feet. Spend the first two days enjoying the moderate white water where you get an opportunity to enjoy the beautiful scenery and natural surroundings. Zanskar offers spectacular physical features, unlike anything you have seen in all of India or the world. At the end of the Zanskar valley, get ready for the spectacular Zanskar Canyon, also referred to as the Grand Canyon of Asia. The walls of the Canyon go up thousands of feet off the river bed. You have a feeling of being at one with nature and may feel like the only person in this desolate part of the world. The Zanskar canyon is a grade 4 section and offers amazing white-water for rafting and kayaking.

This 7 day tour offers in depth exploration of Paro and Thimphu, a visit to the Tiger’s Nest Monastery, the ancient capital of Bhutan and the stunning Phobjikha Valley, a famous shelter of the rare Black Necked Cranes. This tour is for those who wish to experience the essential Bhutan and explore out of the towns to get the feel for daily life in Bhutan. This trip allows the traveller to see the stunning traditional architecture and the landscape on an overland drive to the ancient capital and beyond to Bhutan’s haven for the rare Black Necked Cranes, which shelter here in the winter months. We get to explore this truly unique culture, clothing and crafts, farming and rural life, the famously spicy food and of course to learn about Bhutan’s incredibly rich Buddhist heritage! All of this, set in the beautiful Bhutanese landscape with its high mountains, lush forests and picturesque terraced fields. 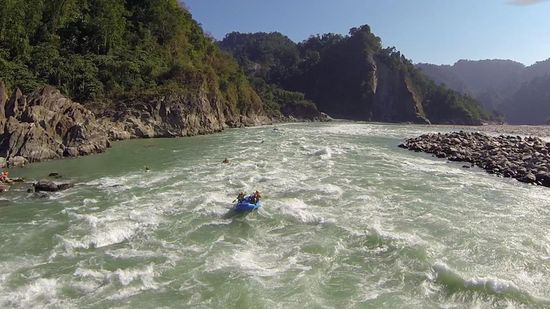 The Tsang po river from Tibet flows into India as Siang and after the confluence of Dibang and Lohit becomes the great Brahmaputra. While most Indian rivers bear female names, this river has a rare male name, as it means “son of Brahma” in Sanskrit. The expedition on the great Brahmaputra begins at Tuting in Arunachal Pradesh where it is still called the Siang. Get ready for some of the best big white water the world has on offer for rafting. You’ll be pumping adrenaline all the way as you hit rapids such as the ‘Pulsating Pulsi’ and ‘Toothfairy’ at Cherring. This self contained river run offers an awe-inspiring journey through tropical forests, gorges and a peek into a rich culture, unlike any other. The Great Brahmaputra is for anyone who is looking for an exhilarating rafting and kayaking experience that is sure to leave you with goose bumps whenever you think about it.

We camp on a beach beside the river almost every night of the expedition and doze off, gazing at the stars as we slip into dreams of the adventures of the day and look forward to the next. 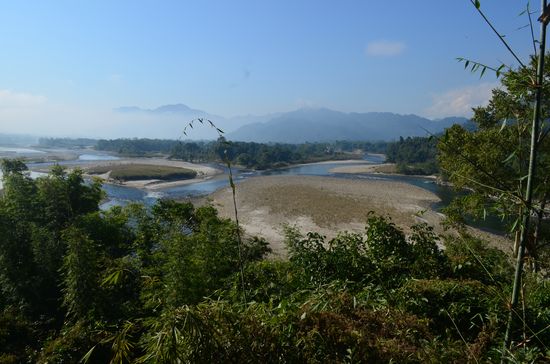 Welcome to India’s remote North-eastern Frontier. A land that has remained hidden and inaccessible to outsiders for a long time.

North-East India is still the mysterious land of natural abundance that India was once upon a time. It is mesmerizingly beautiful; Nature’s masterful hand is seen everywhere – in the craggy mountains, in the darkness of the deepest forests and in the force of free-flowing rivers and waterfalls. Here, the tiger growls freely to proclaim his territory, while man in all humility, has built for himself a lifestyle that though harsh is spiritually satisfying.

Geographically, North-East India refers to 7 states commonly known as the “Seven Sisters” – Arunachal Pradesh, Assam, Manipur, Meghalaya, Mizoram, Nagaland and Tripura.  This region is also one of the most treasured eco-friendly sites in the entire world.

This leisurely two-week itinerary allows a direct approach to the foot of Mt. Everest, the world’s highest mountain. You trek through enchanting Sherpa high country and unspoilt Buddhist monasteries to Everest Base Camp and the amazing Khumbu Glacier. This trek gives you the opportunity to climb Kala Pattar, a 5554 meter peak on the way to the Everest B.C, which is the superb vantage point for magnificent views of southwest face of Mt Everest and surrounding Himalayan Mountains. Your trail along the Khumbu Glacier takes you to the foot of the Everest where you have an amazing perspective on the Khumbu Ice Fall.

Your itinerary has been designed to ensure your wellbeing in the world’s highest trekking region and that you will safely reach the destination of spectacular Mt Everest Base Camp. 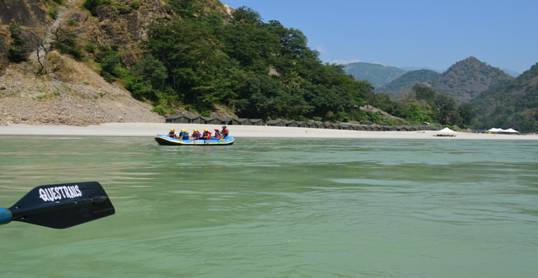 No television, no blaring music, no bright lights … seem dull? Wrong. It is one of the most exciting places you could visit. No wonder we call it – The most scenic riverside camp at Rishikesh.

We offer a wide range of other adventure and culture tours in the Himalayas.  We hope you will join us on an adventure very soon. We do off the beaten track tours to Nepal,Bhutan and Myanmar. If you would prefer to explore the Himalayas with a partner or group of friends, we also arrange private tours – just get in touch to discuss your requirements.

Celebrate Holi by the River Ganges

You can follow any responses to this entry through the RSS 2.0 feed.

This site uses Akismet to reduce spam. Learn how your comment data is processed.