What is white water rafting 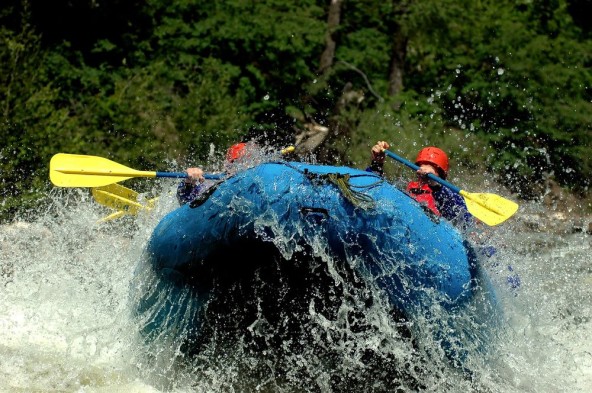 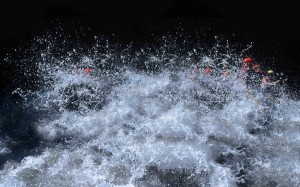 White water rafting is the challenging recreational outdoor activity of using an inflatable raft to navigate a river or other bodies of water. This is usually done on white water or different degrees of rough water, in order to thrill and excite the raft passengers. The development of this activity as a leisure sport has become popular since the mid-1970s. It is considered an extreme sport, as it can be dangerous.

The modern raft is an inflatable boat, consisting of very durable, multi-layered rubberized (hypalon) or vinyl fabrics (PVC)  with several independent air chambers. The length varies between 3.5 m (11 ft) and 6 m (20 ft), the width between 1.8 m (6 ft) and 2.5 m (8 ft). The exception to this size rule is usually the packraft, which is designed as a portable single-person raft and may be as small as 1.5 metres (4.9 ft) long and weigh as little as 4 pounds (1.8 kg).

Rafts come in a few different forms. In Europe and Australasia, the most common is the symmetrical raft steered with a paddle at the stern. Other types are the asymmetrical, rudder-controlled raft and the symmetrical raft with central helm (oars) or Stern Mounts with the oar frame located at the rear of the raft. Rafts are usually propelled with ordinary paddles and or oars and typically hold 4 to 12 persons. In Russia, rafts are often hand made and are often a catamaran style with two inflatable tubes attached to a frame. Pairs of paddlers navigate on these rafts. Catamaran style rafts have become popular in the western United States as well, but are typically rowed instead of paddled. 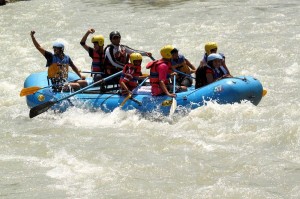 Below are the six grades of difficulty in white water rafting. They range from simple to very dangerous and potential death or serious injuries.

Grade 6: Class 6 rapids are considered to be so dangerous that they are effectively un-navigable on a reliably safe basis. Rafters can expect to encounter substantial whitewater, huge waves, huge rocks and hazards, and/or substantial drops that will impart severe impacts beyond the structural capacities and impact ratings of almost all rafting equipment. Traversing a Class 6 rapid has a dramatically increased likelihood of ending in serious injury or death compared to lesser classes. (Skill level: successful completion of a Class 6 rapid without serious injury or death is widely considered to be a matter of great luck or extreme skill and is considered by some as a suicidal venture) 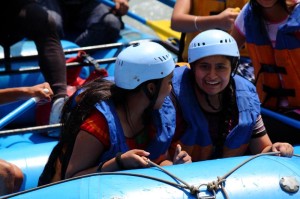 Rafts in white water are very different vehicles than canoes or kayaks and have their own specific techniques to manoeuvre through whitewater obstacles.

Punching – Rafts carry great momentum, and on rivers hydraulics that are dodged by canoes and kayaks are often punched by rafts. This involves the rafting crew paddling the raft to give it enough speed to push through the hydraulic without getting stopped.

Dump truck – Rafts are inherently stable crafts because of their size and low center of mass and often they will shed gear and passengers before they actually capsize. In the industry if a raft dumps some or all of its passengers but remains upright, it is said to have dump trucked.Left over right or right over left – Rafts almost always flip side over side. If the left tube rises over the right tube, the raft is said to have flipped left over right and vice versa.

Taco – If a raft is soft, or under-inflated  it may taco, or reverse taco. Rafts are said to have tacoed if the middle of the raft buckles and the front of the raft touches or nearly touches the back of the raft. This often is a result of surfing in a hydraulic. A reverse taco is when the nose, or stern of the raft is pulled down under water and buckles to touch the middle or back, or nose of the raft.

End over end – Occasionally rafts will flip end over end. This is usually after the raft has dump trucked to lighten the load, allowing the water to overcome the weight of the boat flipping it vertically before it lands upside down. Rafts will usually taco and turn sideways, making an end-over-end flip a very rare flip in most rafts.

Down Stream Flip– A raft capsizes after encountering an obstacle i.e. rock, feature like a hydraulic or even another raft. These objects are usually stationary or possibly surfing in a hydraulic. On this occasion the raft becomes unstable and usually flips over downstream or in the direction of travel. A downstream flip may be exacerbated by the load or people in the raft. People may physically assist in the inertia of the flip by pulling the boat over on top of themselves.

Flip line – The flip line technique is the most used in commercial rafting where flips are common. The guide will take a loop of webbing that has a biner on it and attach it to the perimeter line on the raft, Standing on top of the upside down raft they will hold the line and lean to the opposite side from where the flip line is attached, re-righting the raft.

Knee flipping – Capsized rafts that are small enough with little or no gear attached can be knee flipped. This involves the rafter holding the webbing on the underside of the raft, and pushing their knees into the outer tube, and then lifting their body out of the water, leaning back to overturn the raft.

T rescue – Much like the kayak technique some rafts are large enough that they need to be overturned with the assistance of another raft or land. Positioning the upturned raft or land at the side of the raft the rafters can then re-right the raft by lifting up on the perimeter line.

T-grip re-flip – The T-grip on a rafting paddle may be used to re-flip light rafts by inserting the Tee into the self bailing holes around the floor perimeter and re-righting the boat in the same manner as the flip line technique.

Alluvial – Pertaining to material carried or laid down by running water. Alluvium is the material deposited by streams. It includes gravel, sand, silt, and clay.

Back Pivot – Turning the raft from a ferry angle to a stem-downstream position.Used in tight places to recover from an extreme ferry angle, this maneuver narrows the passing space of the boat and allows it to slide closely past obstructions.

Back roller – A broad reversal such as that formed below a dam or ledge.

Beam – The width of a raft at its widest point.

Biner – Short for Carabiner which means “clip” in Italian. In rafting, biners are used in rope and pulley rescue systems to secure things to a raft and as items of adornment in river rafting.

Rock splats – If the rafters load the back of the raft, they can paddle the raft into a rock on the river, having it hit the bottom of the boat instead of the nose; if done correctly this can raise the raft up vertically on its stern.

Surfing – Commercial rafts often use waves on rivers to surf.

Nose dunks – Large rafts can enter hydraulics called holes from downstream and submerge their nose, or reverse taco. This can be a safe way to get rafters wet in a hydraulic.

Pirouette – A move executed by either a sweep or draw stroke, sending the raft spinning with the current. Often useful for avoiding obstacles.

White water rafting can be a dangerous sport, especially if basic safety precautions are not observed. Both commercial and private trips have seen their share of injuries and fatalities, though private travel has typically been associated with greater risk.[citation needed] Depending on the area, safety regulations covering raft operators may exist in legislation. These range from certification of outfitters, rafts, and raft leaders, to more stringent regulations about equipment and procedures. It is generally advisable to discuss safety measures with a rafting operator before signing on for a trip. The equipment used and the qualifications of the company and raft guides are essential information to be considered.

Like most outdoor sports, rafting in general has become safer over the years. Expertise in the sport has increased, and equipment has become more specialized and increased in quality. As a result the difficulty rating of most river runs has changed. A classic example would be the Colorado River in the Grand Canyon or Jalcomulco River in Mexico, which has swallowed whole expeditions in the past, leaving only fragments of boats. In contrast, it is now run safely by commercial outfitters hundreds of times each year with relatively untrained passengers.

Risks in white water rafting stem from both environmental dangers and from improper behavior. Certain features on rivers are inherently unsafe and have remained consistently so despite the passage of time. These would include “keeper hydraulics”, “strainers” (e.g. fallen trees), dams (especially low-head dams, which tend to produce river-wide keeper hydraulics), undercut rocks, and of course dangerously high waterfalls. Rafting with experienced guides is the safest way to avoid such features. Even in safe areas, however, moving water can always present risks—such as when a swimmer attempts to stand up on a rocky riverbed in strong current, risking foot entrapment. Irresponsible behavior related to rafting while intoxicated has also contributed to many accidents.

One of the most simple ways to avoid injury while out of a raft, is to swim to an eddy to avoid being taken downstream.

To combat the illusion that rafting is akin to an amusement park ride, and to underscore the personal responsibility each rafter faces on a trip, rafting outfitters generally require customers to sign waiver forms indicating understanding and acceptance of potential serious risks. Rafting trips often begin with safety presentations to educate customers about problems that may arise.

Due to this the overall risk level on a rafting trip with experienced guides using proper precautions is low.[citation needed] Thousands of people safely enjoy raft trips every year.

Like all outdoor activities, rafting must balance its use of nature with the conservation of rivers as a natural resource and habitat. Because of these issues, some rivers now have regulations restricting the annual and daily operating times or numbers of rafters.

Conflicts have arisen when rafting operators, often in co-operation with municipalities and tourism associations, alter the riverbed by dredging and/or blasting in order to eliminate safety hazards or create more interesting white water features in the river. Environmentalists argue that this may have negative impacts to riparian and aquatic ecosystems, while proponents claim these measures are usually only temporary, since a riverbed is naturally subject to permanent changes during large floods and other events.

Rafting contributes to the economy of many regions which in turn may contribute to the protection of rivers from hydroelectric power generation, diversion for irrigation, and other development. Additionally, white water rafting trips can promote environmentalism. By experiencing firsthand the beauty of a river, individuals who would otherwise be indifferent to environmental issues may gain a strong desire to protect and preserve that area because of their positive outdoor experience.

You can follow any responses to this entry through the RSS 2.0 feed.

This site uses Akismet to reduce spam. Learn how your comment data is processed. 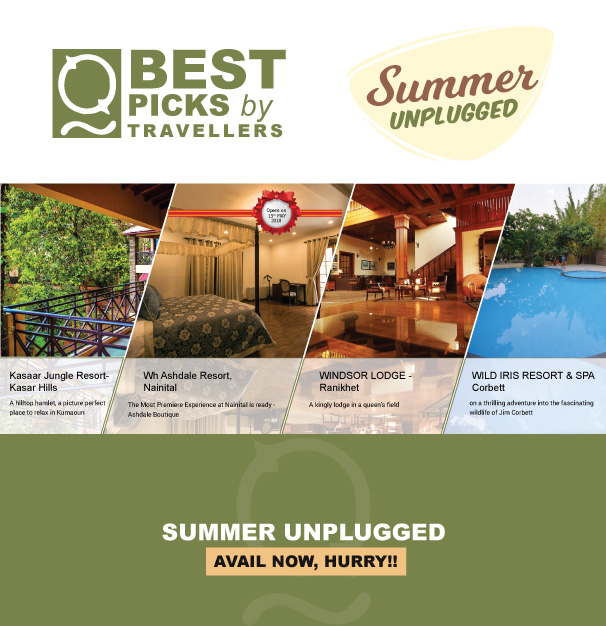